The Rocky Point Rally™ turns 15 this year and is growing into a new logo! The event, to be held on the shores of Rocky Point Nov. 11 – 15, 2015, is shaping up for a great year! Organizers were thrilled to see the enthusiasm and creativity displayed in the recent 2015 Logo Contest – with entries coming in from both sides of the border! Two local judges, along with yearly sponsor Law Tigers in Arizona serving as a third judge, assisted Rally founder and organizer Oscar Palacio who then selected the final design for the new logo of the Rocky Point Rally™.

To ensure all designs were judged on the same playing field, each design submitted was printed out, given a number, and presented to the judges without any further information as to name or even as to where the artists were from. Thank you to all the judges for participating! 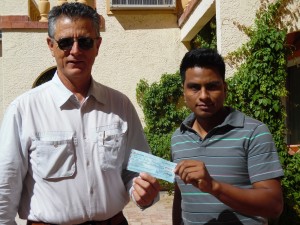 Congratulations to Puerto Peñasco painter, graphic designer, and airspray artist Israel García Rios for having his design selected from among nearly 30 entries as the new Rocky Point Rally™ Logo! Accompanying his design, Israel explained the design includes the iconic image of the malecón and provides a strong visual impact. Israel’s design will be incorporated into items for the 2015 Rocky Point Rally™ including the official pin and t-shirts, along with additional goodies such as koozies, bandanas, and more found in the Participant Registration Bag!

Israel met with Rally founder Oscar Palacio recently to receive the well-deserved $500 US check as promised by the contest. ¡FELICIDADES, ISRAEL!

Thanks again to all who participated in this year’s Logo contest!  To see all the entries received, visit the gallery at:   Rocky Point Rally Logo Contest on Facebook