More than $200,000 pesos raised in registration fees from 2014 Rocky Point Rally participants were presented to the seven charitable organizations of Puerto Peñasco and Sonoyta, with $2,100 US going to each group.

On Nov. 21st, Oscar Palacio Soto, founder and principal organizer of the traditional event, gathered with volunteers and rally committee members in the office of Puerto Peñasco Mayor Gerardo Figueroa to present cash donations to each of the charity groups who each year benefit from the event: the local Red Cross, Fire Department, DIF Puerto Peñasco and DIF Sonoyta, La Montaña school for children with special needs, Casa Hogar, and the local George Papanicolaou Cancer prevention and awareness group.

Palacio Soto expressed his appreciation for the support of this year’s sponsors, as well as the numerous volunteers who helped with registering participants at the 14th Annual Rocky Point Rally™. Donations this year were up 75% over 2013.

In addition, the Rally organizer added with the growth in numbers this year, with more than 6000 motorcycles taking part in the event, plans are already underway for a special edition of the Rocky Point Rally™ next year for the 15th anniversary (Nov. 11 – 15, 2015).

For his part, Mayor Figueroa praised the organization of the event which undoubtedly helps strengthen the economy of various sectors across the city, as well as local hotels which reported being completely full.

Samuel Ortega, local DIF Director, expressed his thanks for the donation and noted it will be put towards the purchase of a dialysis machine for the new clinic. 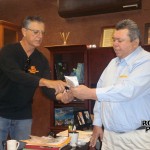 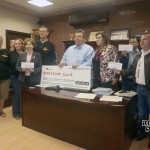 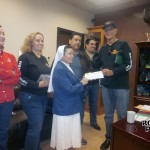 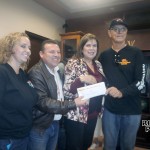