Ride through Ajo in November!

Ride through Ajo in November! 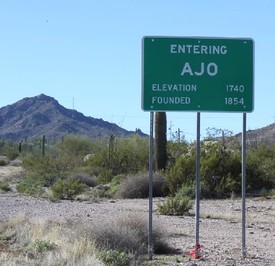 Heading south on Highway 85 from Gila Bend, the small town of Ajo, AZ is a frequent stop to gas up and grab a bite before making the final trek to the border. This year, it’s also the first stop on the “Sanborns Over the Border Mystery Poker Run” for the 15th Anniversary Rocky Point Rally when coming down AZ85. Ajo businesses, artists, food vendors, and even bike & car fanatics are getting into the action for this year so in addition to picking up your Poker Run Card next month, there will be a Car Show / Arts & Food Fair Nov. 11th and 12th right next to the Poker Run stop at the Chevron when entering town (from the north)!

Rocky Point Rally “Sanborns Over the Border Myster Poker Run” – Nov 11th, 12th & 13th *Poker Run cards available at the “Do it in Ajo” event on the 11th & 12th and @ Chevron / Sanborns office on the 13th * [Poker Run $10 US donation to charity organizations in Rocky Point – paid when turning in cards @ Playa Bonita on Fri. Nov. 13th] 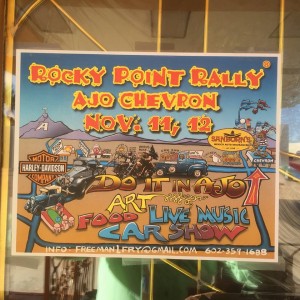 Tips for riding through Ajo: