The greatest motorcycle fiesta just South of the Border, about an hour’s ride from AZ, the Rocky Point Rally™ is getting ready to celebrate its 15th Anniversary this coming November in Puerto Peñasco, Sonora, MEXICO!  Some of the highlights in store this year on the shores of the Sea of Cortez from Nov. 11th – 15th include an extra day, more venues, lots more paved streets, a new logo, plus poker runs starting from CA and AZ, a Charity Poker Run in town, bike show, plus a toy collection for local kids!

The Rocky Point Rally™ was started in 2001 by Oscar Palacio Soto and a group of friends who, after riding up to the Laughlin River Run, decided Rocky Point would be the perfect destination for a Fall Rally. Traditionally sunny skies, ocean views, concerts, a bike parade through town, and mucha fiesta have attracted growing numbers to these shores ever since. Along with the fiesta, volunteer registration donations go to local charity groups each year ranging from a school for disabled children, cancer awareness and prevention groups, a home for the elderly, the local office for family & children services, plus the Red Cross and local Fire Department. Over the years, registration donations have raised over $150,000 US for these charitable efforts. Registration bags this year will include oficial Rally gear including pin, patch, koozie, bandana, souvenir 15th anniversary wristband, and more! 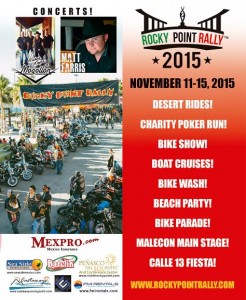 In recent years the Rocky Point Rally™ has seen a huge increase in numbers, with close to 7000 bikes rolling through town in 2014, plus thousands more people who head to the area to take in the rocking four days of fun and fiesta by the sea! More than 7500 bikers are expected for the 15th Anniversary event.

The 15th Rocky Point Rally™ gets started this year on Wednesday, November 11th with the music of Matt Farris on the patio at Playa Bonita, where it all began 15 years ago, along with American Legion chapters from AZ plus from Rocky Point who will be on hand to display flags. American Legion Post 109 Corona de Tucson, AZ will also be holding the Bike Show again this year on Saturday, with great prize plaques going to winners in each category. Thursday brings with it the even bigger kick-off party at Banditos, which proved to be a great spot under the palapa last year and will be welcoming back The Black Moods out of AZ – along with Whiskey’s Quicker over the weekend! Heading into Friday, folks can head out on the Ride into the Desert and the Pinacate Reserve and/or join the Charity Poker Run making its way from resort to resort. That night, after all-day fiesta in the Old Port, the traditional Beach Fiesta hits Playa Bonita once again before parties take over the night across city streets and cantinas. Saturday at noon don’t miss the Bike Parade through town, winding its way to the Old Port where the fiesta keeps going all afternoon in an atmosphere that has been called “Sturgis meets Mardi Gras”, complete with Bike Show, Main Event concert stage, burn-outs, bike wash, and more!

Looking for the perfect Rally this Fall? Grab your Passport and save the date for the Greatest Motorcycle Fiesta Just South of the Border – 15th Anniversary Rocky Point Rally™ – November 11th – 15th, 2015!   www.rockypointrally.com